Grampfather is an indie-psych-thrash-rock band based out of Kingston, NY.

Our 4th album Magnum Grampus is our response to how the world has seemingly gone to shit in recent years, especially in 2020. While some songs, like “Girtha,” “Remnants,” and “End Times (Major),” are reminiscent of our usual indie/alternative/chillrock, the others, like “Eat Shit and Die,” “You Just Die, and That’s It,” and “Sludgement Day,” have a more thrashy and abrasive sound, and the themes of the lyrics are a lot darker and angrier, exploring concepts like death, political fuckery, and the obviously troubled state of our criminal “justice” system.
I used to hold myself back when writing angry lyrics, thinking, “This is not what I want to project into the world. I want people to associate Grampfather with positivity, fun, good times, etc.” Welp, considering the times, it’d feel irresponsible and inappropriate to act like “it’s all good,” because it’s really not. Anyone who’s not outraged at the injustices committed daily by the people who we pay to uphold justice, and at the erosion of democracy in America by the people elected to maintain it, is either ignorant, deluded, complaisant, or complicit–or some fucked combination of these. With that said, apt cynicism is at the core of our new album.
The lyrical content may seem bleak, but I view the music itself as a rejection of the forces deteriorating our conceptions of a “good world,” and “common sense,” and “basic human decency,” and as an energetic celebration of life. In the words of Andy Dufresne, “Get busy living, or get busy dying.” We choose the former, which is why we’ve been working so hard over the last few months writing and producing this album. If there’s one central theme I’d like people to take away from our music in general, it’s “Make the most of a shitty situation.” While, in a perfect world, we’d of course rather be moshing with you all to these songs in some sweaty basement, we’ve utilized our time in lockdown to create these songs for your enjoyment, and will continue to make more music, so that when it’s safe for us all to rage together again, it’ll be fucking glorious.

In the beginning, a rock appeared in the firmament, and in that rock a fissure did form. An old man with youthful eyes looked upon this rock and said, “I shall call you ‘Shredrock.'” And upon receiving the reverberations of his utterance, the rock burst forth a great explosion, showering the man with mystical properties, endowing him with the wisdom of old age and the vigor of youth. And when the phenomenon did, at last, cease, the rock told the man, “I shall call you, ‘Grampfather.'”

SUPPORT THE GRAMPFUNDER!
ANYTHING YOU CAN OFFER
IS APPRECIATED
AND WILL GO TOWARDS
FUNDING FUTURE PROJECTS

Find What You’re Looking For

Gramp Care Package: Include the address you’d like it shipped to 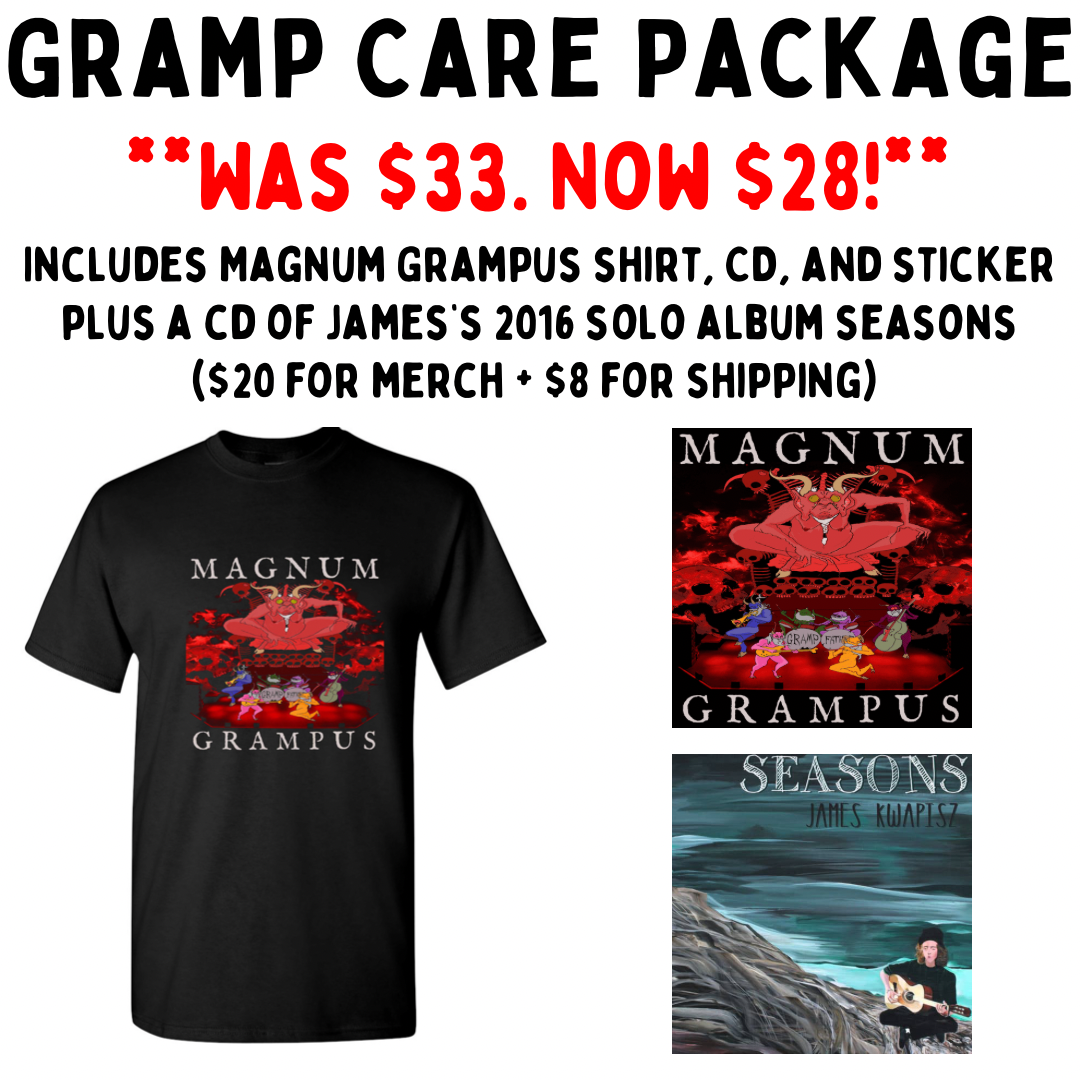 We’ll be back at @blueprinthv 10/16 at 4:00PM 🤘🤘
Thanks for 1,000 views 🥲
Happy 4th bday to Gramps of Wrath 🥳
This show has been moved to 10/2 🎃
CHAOS ⛈
Super grateful to have been added to this bill last minute. Playing under a pavilion at The Field of Dreams, 246 Libertyville Rd, New Paltz, so come thru rain or shine

Check out our new single “The Myspace Tom Continuum”